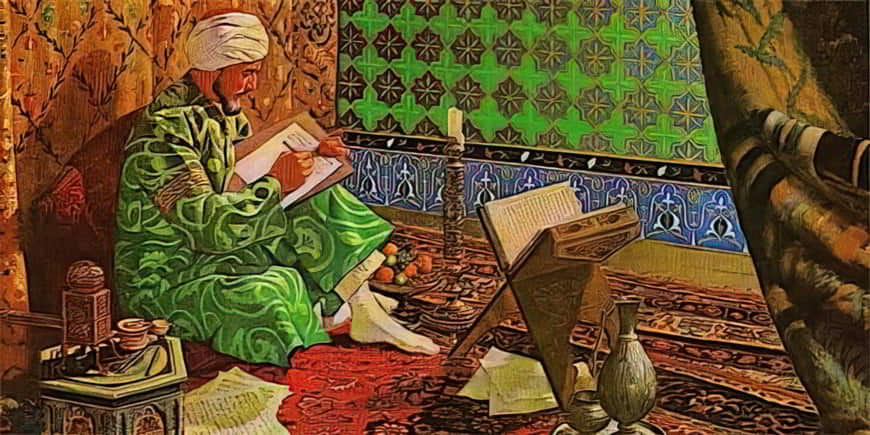 You may have picked up the little bestseller from Paulo Coehlo called "The Alchemist" from 1993. The book presents a popular view of what alchemy is about, but how reasonable is that image?

The hero of Paulo Coehlo's story is a boy named Santiago. The story also stars an anti-hero, an irritable Englishman who is a student of alchemy. He lugs around a pile of books and is not so friendly. This Englishman is painted as a cerebral character deeply engrossed in parables about alchemy, almost to the point of making him a caricature. At some point I expected that after flipping the page I would read about how he stood "hunched over a big fuming kettle, stirring a green luminescent liquid".

The existential view that life should be lived forward, with passion, with love, in tune with one's surroundings - that idea appeals to all of us. We all have our dreams and tapping into that vibe of love and boundless hope is what makes us seize the day. It would be agreeable if this would be the gist of the book: follow your dreams, live in the moment, keep an open mind and seek to find the mysteries of life within yourself. Unfortunately, the follow-your-heart-mantra is over-romanticized and magnified to a level of such simplicity that it starts to work against itself.

Some readers might be excited by the convenient idea of becoming masters of the universe by watching the endless horizon, if only they'd believe. They would make sure not to fall in the same trap as the Englishman who learns nothing of value from his books - books which make life needlessly complicated. Sounds reasonable, right? Who doesn't want to keep things simple? But now imagine the Englishman had a dream to become a doctor. How reasonable would you find a story that states his medical school books and his dedication are worthless? That all of that is unnecessary, that he should just go ahead and follow his heart and heal people? That he will only attain what he seeks if he forgets everything he knows? Even if one would insist one can only learn by experience, and not from books, the author seems to forget that the Englishman is actually "learning through hands-on experience" by working with nature in his laboratory.

Although this little book on pop-alchemy does have its charm, it tends towards spiritual junk food - one of the many in an avalanche of books on the subject that have risen to popularity with the self-help new-age movement. In interviews, the author stated that he studied alchemy for 11 years to write this book; and in the preface, the author indicates that his long frustration with alchemical texts was resolved by his teacher (who was of the type that believed alchemical symbols were exclusively a practice of inner alchemy). The idea that true alchemy excludes the material and deals only with inner alchemy is a misunderstanding that has gained much ground. It is also a common phenomenon today that people frustrated with alchemy seek the quick resolution of the new-age variety of interpretation to the point that many new-age emotional healers describe themselves as "alchemists".

Alchemy is one of the most profound expressions of human creativity, and an Art of healing in its highest aspect. It used to be called the "Royal Art" which can be understood to mean an holistic Art, because only nobility in ancient times had the time and resources to become holistic polymaths. Alchemists were some of the greatest polymaths in history: Geber, Al Razi, Omar Khayyam, Albertus Magnus, Roger Bacon, John Dee, Tyco Brahe, Isaac Newton and many others who are lesser known. These great individuals practiced the Art of Alchemy in its finest and most comprehensive form: the refinement of the spiritual and the material as to express the soul in all its magnificence. This perhaps captures the essence of all art: it is a way towards the sacred. It is an Art in which two things are transformed: the matter in the crucible and the psyche of the artist. This is not much different from the painter who transforms the white canvas to a world of colour while at the same time something energizing and purifying happens in the inner plane. Once we have invested enough in our own skill and understanding, making art does not just expend energy, it gives energy and may transform something inside us in the process. This is the same with the Royal Art of the Alchemists which presupposes sacrifice, knowledge and hard work but through which the lead or daily existence is transformed into gold, harmony, joy, happiness knowledge and spirituality.

The Magnum Opus, the making of the Philosopher's Stone, is the apex of this Art which involves a herculean effort both in terms of inner work as well as in the lab. Without a knowledgeable teacher, the average practitioner will never come close to completing even only the first stages in the process. There are thousands of books on alchemy but they are written so obscurely that they are practically inaccessible. Take for example the "Mutus Liber" (Book Without Words). Magophon wrote a commentary and however interesting his commentary may be, it does not really explain the path. To understand the "Mutus Liber" on a more intimate level, one would need to seek someone who has tread the path before us. Staring out to the horizons can be very rewarding but those who have taken the practice of alchemy to their heart know it takes a lot more than that to make progress and to truly appreciate this this magnificent Art.